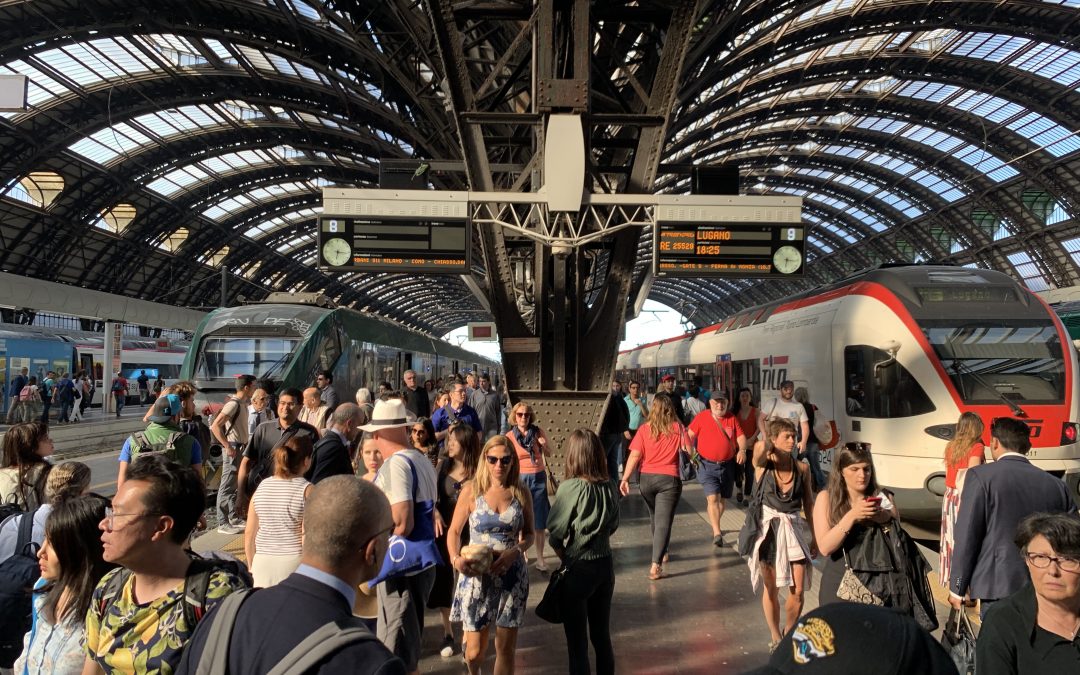 WE ARE FINALLY IN ITALY!

We got through the passport check, which took about 45 minutes, and headed to and found the train station at the airport.  I was a little intimidated by buying my ticket from Milan Malpensa Airport (MXP) to Milano Centrale on the machines, because it didn’t seem to be working (it didn’t help that I think I forgot to press English first), so I went to the man at the counter.

For a person at work, he seemed so passive and half asleep.  He was helpful, but very indifferent. Quite the introduction to Italy! Anyway, we bought return tickets as well and we were able to figure out how to validate our tickets before we got on the train.  (This is an important point, which will be covered in another article!) We got three seats together and took the approximately 45 minute ride to Milano Centrale.

When we got to Milano Centrale, the train station, it was was large and fairly impressive, but honestly, we’d been going for so long and still had to taxi to our AirBnB and get checked in to the point that, despite its beautiful interior and exterior, I hardly noticed or cared!  We’d left our hotel at 9:30 in the morning on the 10th, and were just now getting to head to our room at about 2pm on the 11th after a long international flight!

Our AirBnB in Milano Thankfully, a taxi was immediately available and we arrived at 14:40 (2:40pm) outside our AirBnB to meet with Eduardo.  He showed us around, but he spoke no English. I was able to use the app Converse to talk with him, specifically about check out (contact Julio, leave key inside and door unlocked).  He was kind and naturally I thought we’d be speaking to mostly people whose first or only language was Italian, so that was no problem, and of course we wanted to explore around and up and down our street, but we were wiped.

We sat on the couch and dad and Paul immediately fell asleep.  I kept telling myself I wasn’t tired, as I’d slept on the plane, but I fell asleep too. After our nap, we got up and went walking.  We walked down to the Navigli Grande, which was accidentally discovered.  Along the way we passed many shops: shoes, farmacia, clothing, bras, restaurants, you name it.  Just like in Spain, the restaurants didn’t open until later (though some places were open at this time… around 5pm).

Our street, Corso di Porta Ticinese,  is flanked on both sides by big historic gates.  We walked to one and explored the Church of San Lorenzo nearby.  The statue of Mary in there looked remarkably like one I’ve seen in the diocese (on campus, I think!). We walked towards the Navigli, which are very old canals. I was impressed by the number of people fishing in the canals, surprised by the way the tall apartments along the canal reminded me of houses from the Netherlands rather than what I would imagine Italian apartments would look like, and surprised to find an elderly woman feeding the pigeons, who got trapped behind a gate! We ate dinner, which may have been spectacular, but we were so tired that we might not have been able to notice.  Before we settled in for the night, we walked quite a long distance to find a shop that sold bottled water and headed back.

Today has not been the most invigorating day or the most interesting, but then again, we just arrived after about 24 hours of traveling.  Tomorrow, the goal is to explore Milan and see the Duomo! 🙂

Did you miss the beginning of our journey?  Check out Italy Trip, Day 1 and 2, and sign-up for our newsletter to receive updates on future posts!