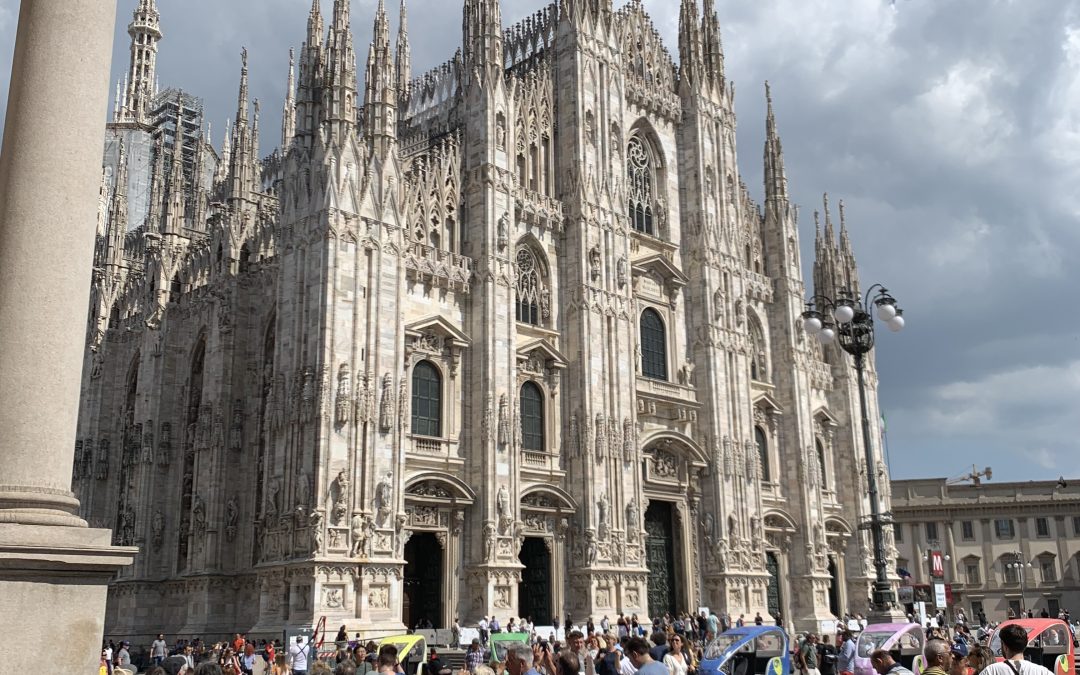 Finally, we are settled in Italy and ready to explore Milano!

Today we woke up late and have definitely been hit with a bad case of jet lag!  We went to bed last night around 10 and didn’t wake up today until 11:30! All three of us could have kept sleeping, too, but we got up anyway.

Dad and I went down the street to a corner cafe and ordered two cappuccinos to go.

Wow!  For 1 Euro, I had the best cappuccino I think I’ve ever had in my life.  It was delicious, tasty but not bitter, the milk was perfectly foamy, and it wasn’t hot at all!  Being not hot might not sound appealing, but one of my biggest problems with American coffee is that it is so hot, I have to let it sit fifteen minutes before I can start to sip it.  Not so here! It was definitely warm and it was tasty, but it was very easily drinkable!

Tickets to The Duomo We all took off and walked to the Duomo.  Today was… Florida-esque hot. The humidity wasn’t quite as bad, but I couldn’t wear the white cardigan because it was just too much in the sun.

We found this great panini shop that catered to locals and tourists alike.  The food was really tasty!

We strolled to the Duomo and it was insanely crowded.  (Well, sort of.)*

*Side note… now that I’ve been to Rome and Venice, I have changed my mind and feel that Milan was NOT insanely crowded!  In fact, while the Galleria was packed, we were not really overwhelmed by people! The Vatican Museums in Rome, on the other hand, make Disney World in Orlando, FL seem like a moderately busy place.  Still, I’m keeping the phrasing that the whole area was busy because at the time, I didn’t realize how busy Italy could really seem, and it might be your first impression if you start in Milan, too! The plaza in front of the Duomo, all the streets nearby and all of the stores were all packed.  It was very uncomfortable in the heat. I found myself becoming really annoyed because I was worried the line to get into the Duomo would be extremely long as we didn’t have tickets ahead of time.

Well, luck was on our side, thankfully!  I walked alongside the church, passed the line of people waiting for their pre-paid tickets, and I found that in the building across the street was the gift shop and the line for regular tickets… lo and behold, there were probably 4 people in line ahead of me!!! Wow!

I had read horror stories, by the way, about not purchasing tickets ahead of time.  I really didn’t expect us to get in, so I couldn’t believe we had such luck!

I bought the tickets from an electronic machine for only 9 Euro for the three tickets!  We got there at 2:15 and they were timed tickets for entry between 2-4pm. I heard an announcement saying that the last entry time was 4:50pm, so there was no reason to buy the 4-6pm timed entry tickets.

They also had tickets there for stair passes to the top (not sure if a tour was included), and tickets for elevator pass to the top.  I possibly would have gone to the top but the tickets were 14 Euro a person. That’s not terrible, but I knew we wanted to go to the Galleria next door and I wasn’t sure how long the church would take to go through.  I also wasn’t sure how long we would last in the heat, so ultimately, I didn’t buy the ticket. It is worth noting, however, that there were tickets available and at least on this Wednesday in June, getting into the Duomo was a breeze. Maybe the Illuminati ARE real?!

It took about 15 minutes to go through the security line, which was no problem and quite easy, but we were standing in the blazing sun and it was much too hot. Did I mention the heat already?  Anyway, we went in the church… I have to say that I wasn’t as overwhelmed emotionally as I was in Seville. The church definitely had the most stained glass that I’ve ever seen in my life, though.  Multiple rose windows, sun shining through, hundreds of small scenes around the rose windows, huge pillars, small sepulchers everywhere, and the Saint Carlos reliquary and body

The shrine for Saint Carlos, who was very important in the Counter-Reformation movement, was downstairs and Paul and I went.  It was very grand and people mostly observed the order to be quiet. When we came back upstairs, dad was sitting quietly and resting.  It looked like he was asleep! He wasn’t, but Paul and I did giggle about it. It started a running joke the rest of the trip that dad wasn’t sleeping in the church, but rather was praying.

We spent probably an hour in the Duomo.  We walked out and into the square. It was uncomfortably crowded.  (This seems to be a running impression of mine! 🙂 ) A man was selling pigeon feed.  Tourists (but not me, kind of, unfortunately) would hold the food in their hands with their arms outstretched and the pigeons would fly up on them and eat while their friends took pictures.  Paul and dad said no. Oh well. 🙂 We went in the Galleria and it was designed kind of like a cross, with a long covered area and a cross section.  The whole thing is like a massive arch. The entrances are tall and open with a covered shopping area. It was at least 150 feet high according to dad, as there was a 4 or 5 story building with the shops on the bottom and then the arch above.

Versace, Prada, Montblanc, Ferrari store, an art bookshop, lots of restaurants… so many places to explore!  We didn’t go inside any of the stores, though, as high end isn’t really our thing. We did find the poor bull mosaic.  Legend has it that if you spin around on your heel three times with your foot firmly planted on the bull’s testicles, you’ll have luck!  Poor guy. I didn’t do the spinning because there was a long wait with no clear order. People stood in a circle and rushed forward, and I didn’t want to have to compete to hurt the poor bull, so I passed.  We enjoyed watching others rush in and spin, though. We decided to walk back towards the AirBnB but decided to stop at a place that served small sandwiches.  We were quite hungry and tired after walking in the sun! We called mom and chatted, and it rained just a bit.  A woman parked her car on the curb in the middle of traffic, got out, and did some shopping. I couldn’t believe it, but apparently in Milan that is no cause for alarm.  The place we were seated was right by the streetcar track, and the trains came close by. My favorite was a train covered in fake green grass. Paul tried to take a photo of me looking like I was going to get hit, but we couldn’t get the angle right.  Still, it was relaxing and we finally got some more energy. The weather was probably 15 degrees cooler after the rain, and so we wandered again. We stopped in a few shops, looking at shoes and nick-nacks. We stopped at a large park near our room and watched people go by with their dogs and children.  It was quite relaxing in the breeze and nice weather in the early evening. I would be down there all the time if I lived by a place like that. It was quite a busy park, too!  Check out our Italy video, as the park is towards the beginning!

We found a pizza place on the way back that was almost empty.  OH, MAN, THE PIZZA WAS AMAZING! Paul got spinach and ricotta, I got pesto and prosciutto, and dad accidentally got one with sardines that actually was quite good and not very fishy tasting at all.  The bread was soft but had a crisp bottom. The sauce and cheese were delicious. So crusty but so soft and the flavors so strong and clear. I got us three tiny pastries that were about the size of a silver dollar. When we were done, we continued our little walk for a while and got gelato.  I had hazelnut (YUM) and ginger (quite good) and Paul got something like cookies and cream but not quite.  Dad got a dark chocolate cream. The flavors were so strong in a good way, yet not heavy at all. I quite enjoyed it.

We sat outside and an ambulance was nearby.  Dad wanted to know why they sat around in parking lots instead of somewhere like a fire station or hospital like we do in the US.  He asked them and one of the EMTs, a nice woman, was willing to chat about it. I used the Converse to ask her, and she kindly explained that it was easier to help when they’re stationed around town already.  It wasn’t life-altering, but she was very kind and happy to help, and I’m glad to have asked her just for the experience.

Well, after our pizza and gelato and chat we looked at some more shops and strolled back.  We ended up back at the Naviglio but didn’t realize it until we turned around. Boy, these areas sure are crowded, the streets too… bicycles and scooters and UberEats on bikes and dogs and old people and young people and streetcars and cars and us!

I am looking forward to tomorrow’s hopefully calm trek to Lake Como! 🙂

Click here to sign-up for our newsletter with the latest travel adventures, and, if you missed it, you can check out Italy Day 3!