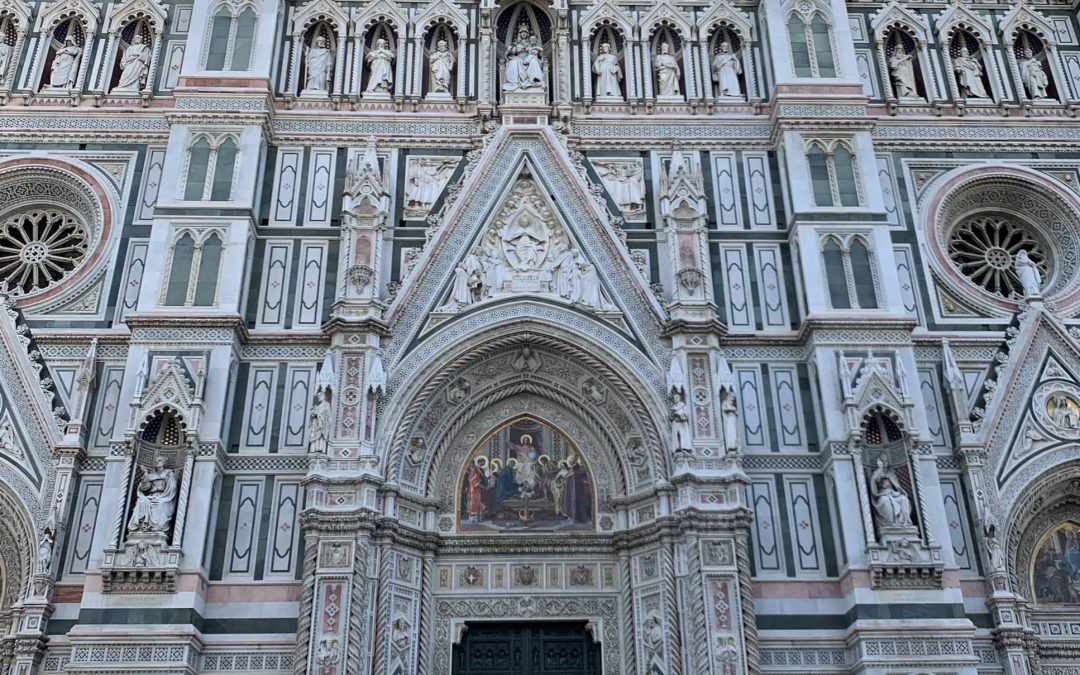 Note: This post may contain affiliate links.  If you click on those links, I may earn a small commission for your purchase at no additional cost to you.  I always post my honest opinion and only share affiliate links to or suggest products I trust.

Happy Father’s Day to dad!   We had a card ready for him that I’d bought back in the States.  It had a globe on the front and said, “Greatest Dad in the World!” with a map inside.   It seemed very appropriate for celebrating Father’s Day while we were traveling together.  Beyond that, we didn’t do anything special per se, but Paul and I told him Happy Father’s Day, gave him the hug and the card, said we were happy to be in Italy with him today.  What a great way to celebrate!  I should add that dad and I have talked about traveling to Italy together since I was a child, so it was a special moment.

We “slept in” for once, getting up around 8:15.  I messaged the photographer we would meet the next day for the photoshoot, as they wanted to change the time to 7am instead of 9am.  We compromised with an 8am start, as after our overly hot morning outside the Colosseum, I wanted to avoid feeling miserable in the heat, but I also did not want to get up at 5am on our trip to meet at 7.

After some housekeeping tasks for the trip, including buying train tickets, we packed up and left.  We had quite a bit of stress finding a taxi again, surprisingly.  The driver said that there were not enough taxis “manifest” that morning.  He said that no one can get a taxi and there aren’t any out.   I asked why, and he said he doesn’t know why.  Interestingly, this has now happened twice:  no taxis Friday in Milano and now, no taxis on Sunday in Roma. H’m.

Anyway, we got one.  They say to always make sure the meter is on and in Rome, I can definitely say that is true!  After at least twice already, drivers attempted to charge 30 Euro for a 10 Euro trip, and feeling good about avoiding that pitfall, we allowed ourselves to get overcharged on the way to the train station.  Considering he picked us up where he shouldn’t have and no other taxis were around, it didn’t upset me at all to pay triple! 30 Euro it was. We had not bought tickets to Firenze (Florence) in advance as I did not want to hem in our morning journey (one of us was not feeling our best, hence the flexibility), so I had gone online that morning and bought tickets for 12:50.  I was able to get us seats across the aisle from each other, but I learned an important lesson about the high-speed train!  I had to pay much, much more for the tickets because I had not bought them in advance.  In addition, it turns out that all high-speed trains are not created equal.

I bought tickets for the time I wanted (though not the price I wanted), but I didn’t pay attention to the actual train I was booking outside of destination, time, and avoiding regional trains.  I booked the Frecciargento train instead of the Frecciarossa without even realizing that I’d booked a different type of highspeed train, and without knowing there was a difference between the two. It turns out the Frecciargento train is a tilting train, which means it can go highspeed through areas that are more difficult, resulting in the train tilting but still being safe.  That really made no difference to us except that the train aisles are much smaller and the overhead bins were not even approaching large enough for our big bags.  Everyone on the train seemed to be having the same problem, and packed bags into the baggage areas between cars, allowing only the thinnest person to be able to pass between trains.  Many people, including us, had their bags under their legs, but mine would not fit in the seat.  Luckily, no one sat next to me on the train, so my bag had a window seat.  It was kind of amusing to see everyone with these huge, cumbersome bags crammed uncomfortably in while the tiny overhead bins sat unoccupied.

We finally got to Florence!  The train station was must smaller than Rome or Milan, and we found the taxi line easily and were in a taxi within probably three or four minutes.  Our apartment is in The Piazza de San Marco, number 7, which is funny in a way because Paul and I always go to San Marco here in town.  We passed an outdoor market and we wanted to go, but we also wanted to see if we could get into the Uffizi before it closed. Dad wanted to go to the market so we split up. The view from our room in Florence

Oh I should say that we met Mario at the room to check in, and he was fantastic: very funny and charming.  Paul didn’t like his lack of knowledge of the washing machine, but otherwise, he was great.  I have to say that this by far is the nicest place we have stayed at, though I liked the Rome apartment.  The bathroom is spacious, the rooms are very nice, the view is great, there is a large kitchen and a small living room.  Dad has a tv with plenty of channels and he seems to like it.  The wood floors in here are beautiful, and the place just feels very comfortable with all the amenities we need. Mario offered to drive us somewhere but we didn’t take him up on it. He also said to contact him if we wanted to eat at his friend’s restaurant and that he’d make a reservation and we would get great service and a cheaper price than on the menu.  Maybe we will do that for dinner tomorrow, but who knows.

For now, we split up and Paul and I attempted to go to the Uffizi.   The line was moderate but I forgot it was 20 euro a person to get in.  40 euro for the two oof us isn’t a big deal but I didn’t want to spend it for a short look around, and, I should add we’d walked probably 20 minutes after traveling all day and I just wanted to sit down and relax. I did find a living statue outside the Uffizi, which was great, and I truly enjoyed taking photos with him.  He was dressed as DaVinci, so if you donated to his box, he’d open his old book and hand you a saying from DaVinci and pose for a photo.  I remember that when I was younger we would see these living statues in EPCOT and I loved them, so it was fun to see an authentic one.

Paul and I wandered and sat occasionally.  We found a small little Beatles guitar and bought it for Jim. We also encountered a parade outside in the plaza that held the fake statue of David.  There were men in medieval or later outfits throwing and twirling flags, and a horse parade, with a loud and talented brass and drum band.  It was quite nice! We walked back towards our room, and it turns out the Accadammia is immediately around the corner from our room.  The line was only 10 minutes and the fee only 12 Euro, so we decided to wait so we could see the original David.  We walked in to a rather small museum, turned the corner, and BAM, there it was! I really was in awe.  Seeing the statue in person, you can immediately understand why this thing is such a treasure to the world.  Partially, it is impressive just due to its size, and, of course, you can go on analyzing the ratio of the hands to the rest of the body or whatever but the optical illusion created definitely worked and it was just so gorgeous and… wow. I read a sign and it said that the statue was graceful, and I knew immediately that was the right word.  Graceful. We took a lot of photos and found a great room of marble busts, as well as some religious paintings, mostly on wood, from the 1300s to 1500s, which typically is my favorite art.  We left, as they were close to closing. We met back up with my father and three of us wandered back down to the plaza that contained the fake statue of David.  We found another plaza with a carousel and browsed after our dinner.  We bought pastries for breakfast and made our way back to the room. The weather here is really pleasant, and for probably just the second or third time during the trip, I’m feeling very relaxed.  This is such a nice town with a very mild, open vibe.  It kind of reminds of Seville in a way.  I’m feeling very good here in Florence.  The city is much smaller in a good way, and much cleaner than Rome and Milan.  There are many tourists but overall the city is very low key and I love it here. We headed back to the room to rest.  The photoshoot is at 8am tomorrow, and I hope we are going to have a quiet, happy day.  I’m looking forward to just being here in Florence, just sitting and being and enjoying.  My worries and concerns are gone.  Maybe we will be able to see our friend Cecelia tomorrow that we met at the airport.