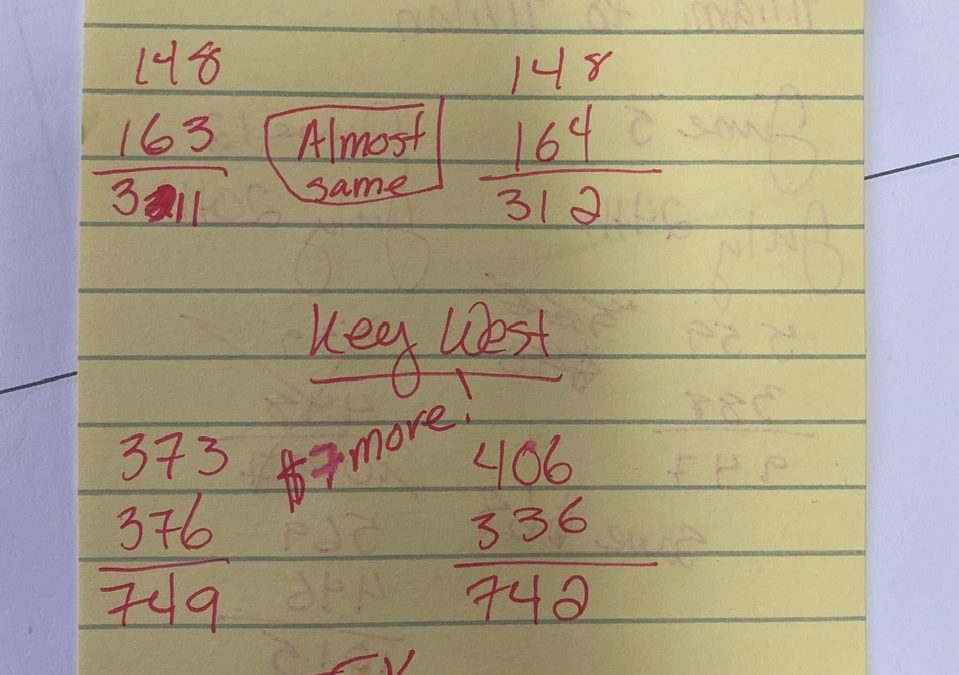 Note: This post may contain affiliate links.  If you click on those links, I may earn a small commission for your purchase at no additional cost to you.  I always post my honest opinion and only share affiliate links to or suggest products I trust.

I just read an interesting travel hack from the site, LifeHacker.  I found the article on my iPad in Apple News, so I assumed that this would be trustworthy, solid piece of advice.

To be fair to the article, it was focused on the advice of one person who wrote in claiming her mother sometimes saved money by using this method, and the article did give a few warnings about using that method.  Unfortunately, by publishing the article to such a large audience, it came across more as a tip or advice for using this method rather than advising against it.

The advice in general is this: double book round trips for places you know you will visit frequently when you are able to plan in advance, and overall your cost of travel will be significantly less.

What does that mean?

Trip 2: Leave NYC to JAX on April 10th; Return to NYC from JAX on June 1st

Supposedly, this is much, much cheaper.  The theory is that a round trip ticket to a popular destination, especially at popular times, for a short trip can be quite expensive because both legs of your trip are popular travel times.  This is compounded when you have a second trip to the same destination coming up at another popular time.

In theory, double booking round trips that are split could make the trips a lot cheaper, because you’re not flying both legs of each trip on popular dates.

Unfortunately, this is NOT true!

I got excited and started looking up prices online.  Some of the dates were popular times and some were not.

How did I come up with these amounts?  I used skyscanner.com and compared 4 different trips: The first was the first split trip, the second was the second split trip, the third was the first of the regular round trips and naturally the fourth was the second regular round trip.  I used the cheapest prices as my examples across the board rather than “best,” as the whole point is to save money. I then added up the total cost of the two split trips and the total for the regular trips and compared the two. If the article I read was correct, then the weird trip should be significantly cheaper.

The best domestic savings I could find by booking like this was, drum roll, please:

I tested 6 different domestic trips.  Two of the trips were literally the exact same price, and one was a $1 difference.  One was a $5 difference and another was $9. One was $7 MORE EXPENSIVE to do the trip that way.

Here’s the deal, though:  Splitting up trips and generally messing around with airline tickets to save money does put you at risk from being banned from the individual airlines!  I’m not sure if that has ever happened with this strange round trip double booking, but why risk it for an identical or just barely cheaper price?

But the main problem is that the article encouraged doing this for international travel!

When you fly internationally, you have to let the government know.  The US government checks to see that you have clearance to fly. When you arrive at customs, they want to know when you’re leaving and why you’re there.

It seems to me that if I were, for instance, to do this little trick with two split round trips to London, that would mean that one of my tickets would be a round trip from London, originating in London and returning to London, and the other would be originating in the US and returning to the US.  What would I say to the customs officers landing here in the US from that ticket that originated in London? That I’m trying to save money so I double booked tickets? That I’m really not staying in the country the way that my ticket says I am?

At the very least, this could be extremely time consuming and/or require me to call the governments of both countries I’m traveling to in order to feel confident in my ticket purchase.  At the worst, perhaps I could end up in the customs office jail while they sort things out.

But could it be worth the risk?  Would the savings offset the potential hassle?

I did two more searches.  The two round trips from Miami to Milan in June and July (very high tourist seasons) came out to $947 with the weird splitting method and $1015 without it, with a savings of $68.  Over two trips.

I also tried a Jacksonville, FL to London trip this way during the two very high travel times of Christmas and Easter.  I knew it would be an expensive trip and in theory, these expensive times would save me the most money. My total savings?

So before you run off and try the advice of any article online (including this one), do your research.   If you’re interested in more advice about travel, don’t forget to sign-up for the latest updates from LaurenGlobeTravel! My apologies for the chicken scratch writing!